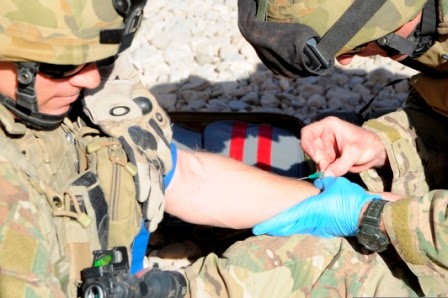 One of the advantages of serving your country through military service is the free health care that comes as a part of the package deal.  This is especially valuable in countries that don't have universal health care.  In fact there is some anecdotal evidence of parents joining the military in order for their children to be provided with life saving health care.  The advantage of free health care is less pronounced in those countries that have free (or low cost) universal health care, such as Australia, New Zealand, Japan, and many European countries.

Health care obviously covers initial care in the battle zone if injured, as well as follow up rehabilitation from injuries sustained whilst serving.  Medical care in these instances has many intriguing questions in regards to military ethics - such as is the triage system based on need, on rank, on which side the soldier has fought on etc.

One aspect of this subset of bioethics that often is overlooked is the fact that in most instances, military personnel are not able to refuse medical care - either on the battlefield, or in routine health care.  This is because health care providers in the military setting actually issue orders to be followed by military personnel in regards to their health care.  The effect of this is that military personnel are unable to choose their health care provider (it is chosen for them), or go against the decision of the medical practitioner.  Usually this is not a problem, as many people generally follow the advice of their doctor, however, it becomes problematic when military personnel are issued orders in regards to their health care that they disagree with - possibly because of religious or philosophical reasons, or because they believe it is not in their best interests to follow the orders of the medical practitioner, who not only has to weigh the benefits to the health of the soldier, but also the benefits to the Army, Navy, or Air Force of their country.