WONDERFUL news coming out of the US - the Edgewood Vets class action has led to the US Department of Defence finally offering medical care for those veterans who were used in biological and chemical experimentation from 1942 to 1975.

Notification letters were sent out on the 1st of November 2017 to all veterans who will be eligible for the health care for injuries they sustained as a result of being human guinea pigs.  The veterans groups are have argued that the Army and Department of Defense are falling short of their legal obligations.

The Edgewood Vets case is groundbreaking, as in 2016 the appelate court upheld their right to sue.  This judgment combined with the 2015 Supreme Court ruling in McManaway et al V KBR effectively overturns the Feres Doctrine which has stopped military personnel being able to sue the Department of Defence since 1950.

It is no co-incidence that since the DoD has been liable to litigation, they are finally offering medical care to soldiers who were injured, as a result of official experimentation, whilst on duty, up to 75 years after the injuries occurred.  Finally the DoD has taken their responsibilities to these veterans seriously, but after an obscenely long delay.

Following the media and legal attention given to this situation, there has also been a resurgence in lawmakers bringing about legislation to ensure particular veterans groups are compensated - for example the Arla Harrel Act, which was signed by President Trump in August 2017 ensures that tens of thousands of soldiers, sailors and airmen who were experimented on with Mustard Gas in WWII, must have their claims reviewed by the Department of Veteran's Affairs.

There is still a long way to go, as many veterans are still not covered under this ruling (such as those experimented on at Ft McClellan), but finally there is a light at the end of the tunnel for veterans used for experimentation.  It is hopeful that the US DoD will change their policies and have a higher standard of care in regards to test subjects, in the same way that the UK Ministry of Defence were forced to, following the 2013 Supreme Court ruling regarding the deaths of several soldiers.

You can read more about the Feres Doctrine here.

You can read more about the Edgewood Veterans Case here. 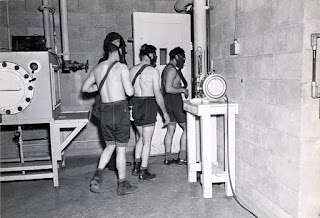 From Edgewood Arsenal via www.npr.org
Posted by Nikki at 9:16 PM