70th Anniversary of the Atomic Bombing of Hiroshima 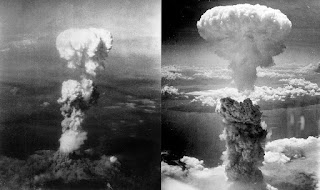 In the late 1980's I spent a year living in Japan as an exchange student in Kofu, Yamanashi. I loved my time in Kofu and it largely shaped the person I am today, particularly living with the Wakao family and training with my Kyudo club to get my black belt in Japanese Archery. When I was living in Japan I met people who had been scarred by their experiences of living through the atomic blast at Hiroshima and Nagasaki. Fast forward almost 30 years, and I am now teaching both of these events as case studies in Military Ethics at the Australian Defence Force Academy.

Today is the 70th  anniversary of the atomic bombing of Hiroshima and coincidentally we have been discussing the event in class.  Making these discussions even more poignant, I currently have an exchange student from the National Defense Academy of Japan in my class, and so discussions of the bombing of Hiroshima have taken on a very personal tone this week (when we would normally be using it to discuss consequentialism).

An article by Christian Appy was published on the Salon website today titled "The indefensible Hiroshima revisionism that haunts America to this day".  I found some of the claims in the article quite shocking, and so went digging to see if the facts matched up to what they were claiming.

I am not a World War II historian. However, I do recognise that there have been two largely separate accounts of the decision to bomb Hiroshima and Nagasaki.  Those on the "pro" drop the bomb side argue that the Hiroshima and Nagasaki atomic bombings were necessary to end the war quickly.  Those on the "anti" drop the atomic bomb side of the argument, disagree with a number of claims from the "pro" drop the bomb side of the debate.  Here is what my digging found today......

In 1947, Secretary of war, Henry L. Stimson argued that the dropping of both bombs were necessary in order to bring about a quick end to the Second World War, and was necessary to save a million allied casualties that would be incurred in a full scale invasion of the main islands of Japan.  From "The Decision to Use the Atomic Bomb", Harper Magazine, Vol 194, no 1161 (February 1947), pp 101-107. 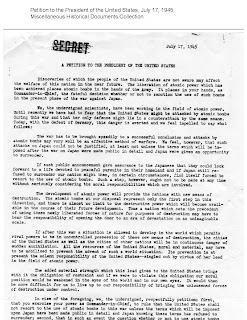 On the 17th of July 1945, twelve U.S. Scientists involved in the Manhattan Project wrote to President Truman petitioning him to not use the atomic bomb on Japan due to the responsibility that they felt the USA had to prevent "opening the door to an era of devastation on an unimaginable scale".  Petition to the President of the United States, July 17, 1945.

On the 18th of July U.S. President Truman wrote in his diary "P.M. [Prime Minister Winston Churchill] & I ate alone. Discussed Manhattan [atomic bomb] (it is a success).  Decided to tell Stalin about it.  Stalin had told P.M. of telegram from Jap Emperor asking for Peace.  Stalin also read his answer to me.  It was satisfactory.  Believe Japs will fold up before Russia comes in".  It is clear from this diary entry that Japan was attempting to surrender as early as July 1945 and that President Truman was aware of this.  It is also clear from this (and from his letters to his wife) that he believed that Japan would surrender before the planned allied invasion of Kyushu in November 1945 and before Russia entered the war with Japan as planned in early August 1945.

General Eisenhower opposed the use of the atomic bomb, arguing in July 1945 with Secretary of War Henry Stimson that he had "grave misgivings, first on the basis of my belief that Japan was already defeated and that dropping the bomb was completely unnecessary, and secondly because I thought that our country should avoid shocking world opinion by the use of a weapon whose employment was, I thought, no longer mandatory as a measure to save American lives. It was my belief that Japan was, at that very moment, seeking some way to surrender with a minimum loss of 'face'".  Eisenhower, D (1963) Mandate for Change, 1953-1956:The White House Years. Garden City, N.Y: Doubleday.  p. 380. 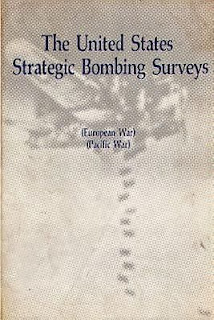 Often the fact that there were 41,700 allied casualties in the taking of Okinawa is highlighted as a consideration for there being a potential for a large number of casualties in the proposed invasion of Kyushu.  However at a meeting held at the White House with President Truman on the 18th of June 1945, Fleet Admiral King stated that there was a big difference between the invasion of Okinawa and the proposed invasion of Kyushu.  "There had been only one way to go on Okinawa.  This meant a straight frontal attack against a highly fortified position.  On Kyushu however landings would be made on three fronts simultaneously and there would be much more room to maneuver.  It was his opinion that a realistic casualty figure for Kyushu would lie somewhere between the number experienced by General MacArthur in the operations on Luzon and the Okinawa casualties."  Minutes of Meeting held at White House, June 18, 1945.  p. 5.  www.trumanlibrary.org

Admiral King stated that the expected casualties would be between 31,000 and 41,700.  This number is drastically different the claim after the bombings that the use of the atomic bomb would save millions of allied casualties.  It seems then that there is little justification for the use of the atomic bombs on Japan, except for their use as a radiation experiment on live participants, and in preventing Russia from invading Japan in the north, leading to the partitioning of Japan in a similar way to Germany.

The fact that the use of the atomic bomb on both Hiroshima and Nagasaki breached the Law of Armed Conflict (LOAC) and did not fulfill the requirements of Just War Theory (jus in bello), combined with the fact that atomic & nuclear weapons have since been declared means mala in se (evil in and of themselves), had already led me to the conclusion that their use was unjustified on the civilian populations of Hiroshima and Nagasaki.  Looking at the evidence I came across today in only a few hours (the Internet is a wonderful thing when libraries such as the Truman Presidential Library make available all their manuscript collection online), it seems that the use of the atomic bomb on Hiroshima and Nagasaki was deplorable, and that the white washing of history around these events is a continuation of that travesty. 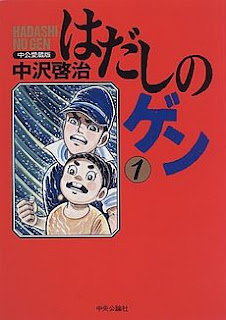 For a more personal account of the aftermath of the bombings of Hiroshima and Nagasaki, it is worth taking a look at the book Sadako and the comic Barefoot Gen.  The Global Hibakusha Project also tells the stories of survivors of radiation from nuclear weapons.