Review of Transgender people serving in the US Military 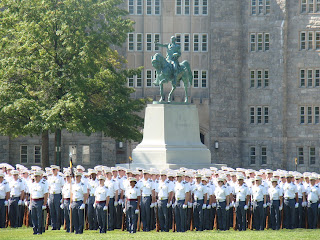 
I am lucky to have been able to teach and become friends with transgender people serving in the Australian Defence Force.  So when I visited the US Military Academy at West Point recently, I was saddened to see how the policy of not allowing transgender people to serve openly in the military affected the lives (and mental health) of cadets at West Point.  To be honest, it brought tears to my eyes, knowing that they were willing to serve, despite the fact that the military could dishonorably discharge them at any time, simply for their gender identity.  It was therefor a wonderful moment when a friend excitedly sent me an article about the possible change in policy regarding transgender people serving in the US military.

U.S. Defense Secretary Carter announced in July that there would be a defense department review into the feasibility of transgender people serving openly in the US defense force.  This announcement followed on from Defense Secretary Hagel's public comments in 2014 regarding the possibility of transgender members serving.  This review will take six months and will look at the practicalities around currently serving transgender soldiers, as well as the issues that may be raised around the transition process for military service personnel who are transitioning gender.

During my time at West Point I felt very honored to be invited to attend the Knights Out Dinner organised by the West Point Gay and Lesbian Alumni Association, and several transgender soldiers were honored at this dinner for their service and for their moral courage in the face of extensive discrimination within the military.  Much of the discussion at that dinner was around the improvement of the situation of gay and lesbian soldiers, and the huge hurdles faced by transgender service members.  I was therefor pleasantly surprised to read of the DOD review into transgender people serving in the US military, as I assumed it would take much longer for such a process to happen.

For many decades gay and lesbian soldiers served in the U.S. military, not disclosing their sexual orientation for fear of being dishonorably discharged as a result of it.  In 1993 President Bill Clinton brought in the "Don't Ask, Don't Tell" policy that made it possible for Gay and Lesbian soldiers to serve, although not openly.  The restriction on serving in the US military as an open Gay or Lesbian ended on the 20th of September, 2011. Many of the service personnel who were discharged prior to DADT for being gay and lesbian were given Less Than Honorable Discharges (sometimes referred to as dishonorable discharges).  These less than honorable discharges had a lifelong impact on veterans, restricting their access to benefits such as veteran's health care, and the GI Bill, as well as making it difficult for them to find employment. The Department of Defense has enabled the 114,000 service members who were discharged only for their sexuality to be able to apply to upgrade their discharge status to honorable, through the review board process for each service. 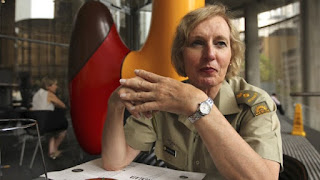 
In contrast to the situation in the United States, transgender soldiers have been able to serve openly in the Australian Defence Force since 2010, and Gay and Lesbian soldiers have been able to serve openly since 1992, (which interestingly was about the time that the Don't Ask Don't Tell policy began).  Group Captain Cate McGregor is Australia's highest ranking transgender military member, having served in many different roles, including as speechwriter and strategic advisor to the Chief of Army, Lieutenant General David Morrison (who is famous internationally for his "get out" video on youtube regarding inclusion in the Australian military.

I look forward to watching the US military move forward to join the Australian military in allowing openly transgender members to serve their country.
Posted by Nikki at 4:20 PM